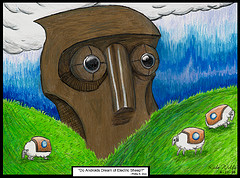 Outlining on computer has been a disastrous exercise for me. Mainly because of a black hole in my computer called the internet. So I was happy when gifted a touch screen media device a few days back. No where near the ipad or the slew of imitators. But cheap enough to avoid stressing about losing it or dropping it and crude enough to refrain wasting too much time on it. But I was happy because now I had a pdf reader and also something to jot down, or rather punch in random outlining notes for my scripts while travelling.

Oh yeah, I am travelling a lot these days. In fact I travel around 2 1/2 hours each day to do 1 1/2 hours of work. Its called community posting. So I (have decided to) spend most of my travelling time outlining. The problem with outlining stage is that for every point in the story you can think of four five different routes to explore and if you don’t scribble down those different routes at different different points, you forget to explore so many interesting possibilities later on. So every 15 minutes or so, I need to jot. Typing on phone is too cumbersome. Earlier I used to scribble on whatever I could lay hands on, trying to balance the vibration of the locomotive or memorise the important things till I reach some land so that I can doodle. But now as I had a new gadget, I don’t have to worry. Or so I thought.

Within one or two days, the problems became clear to me. Even typing on touch screen was cumbersome. But much more difficult problem was that while outlining, I was no more able to be spontaneous in my thinking. To write some thing down, usually I need gaps of 10-15 minutes of thinking which was becoming uncomfortable now because of the awareness that the battery life is dwindling. So I also started this tendency to doodle some pseudo-important points just to write something on the goddamn thing. Also rearranging the lines of scribbling, changing the font and size etc became important preoccupations. This went on for about a week.

Now I am back to pen and paper to outline. Even if I am not able to write, it is fine. Even if my new toy lies idle in my room, it is fine. Better to have some interesting ideas which I forgot than have none at all.

Current uproar about Arundhati Roy’s comments on Kashmir and the ensuing reactions to it kept me thinking. Not much about the issues raised as much, but regarding our ways of responding to views which are in dissonance with that of ours. And its relation to the context and architect of the views.

Why is it that most of the reactions to Roy are so hostile? I am not talking only about the Sang Parivar, or the beaurocracy or the politicians. I am talking about the general public and media. Is it just that her diatribes against ‘the Nation state’ is something too abrasive for a patriotic Indian? May be so. One criticism that is consistently leveled against her is that she takes a bite in every fight, every affray against the Indian government while enjoying the freedom and space offered by the Indian state (Reminded me about similar indignation against Noam Chomsky in US).

But I don’t think that it is the only reason or the central problem. Why is it that Medha Patkar is not hated like Arundhati Roy? Why is that even with all the blood bath, the big Maoist leaders are still shadow figures for us? And look at the last straw. Azad Kashmir. Is Roy the first Indian to offer support for the independent Kashmir? What about all the Geelanis and Abdullahs before?

The difference is probably how Arundhati Roy is perceived in the overall scheme of things. She is viewed as a popular icon who is an outsider to all these issues. So the sentiment is that her swinging her weight into any argument gives an abnormal validity to certain groups in the dispute in an international arena. I think the indignation and fury against her is because she came out with ideological inclinations which were not only unacceptable but also blasphemous for the same general public who had taken her up in their shoulders as a ‘celebrity’ when she won Booker prize. Everyone feels being stabbed in the back after decorating her edifice. END_OF_DOCUMENT_TOKEN_TO_BE_REPLACED